Well, to avoid further delays, I’m just going to start with the easiest: the quantifiable.

Well.
I (obviously) did not fulfill my commitment of writing once a week during these 4 weeks of being on the road. Not even once.
I am, however, fully invested in completely and thoroughly chronicling my journey, if not as a very humble travel guide, then at least to verbalize my adventure to bring some kind of closure. But after the four weeks, where and how do I even start? How can I tell my stories in the ways that they deserve to be told? How do I make the distinction between the physical locations and the thoughts that were inspired by them? Is there even one?
Well, to avoid further delays, I’m just going to start with the easiest: the quantifiable.

Where Did I Go?

I deviated from my planned course a bit, the most significant change being the extra time in Switzerland, at the expense of Milan and Venice. The changes were not so surprising given how little I actually planned, but what WAS surprising was how smooth the whole operation went as I did it on the fly. Here is a map of the route I took and the cities that I had the pleasure of visiting (left), and my actual schedule (right). 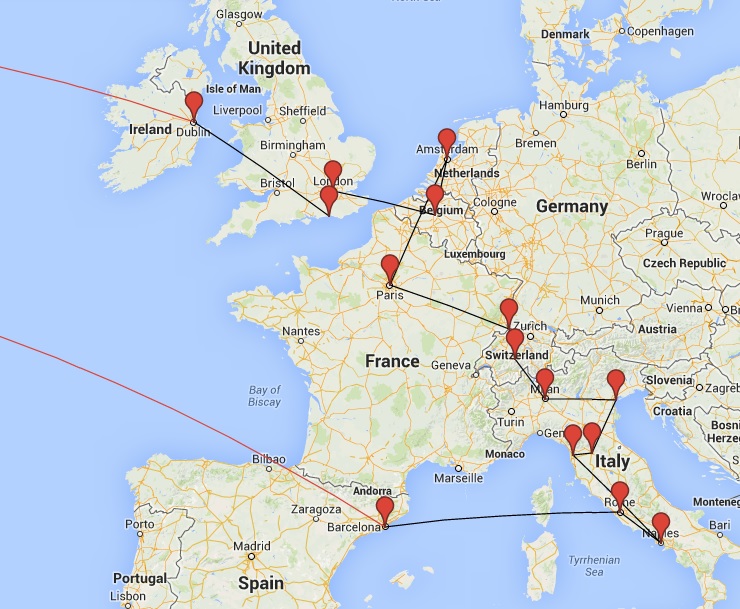 My Travel Route. Very proud of my almost perfectly straight course due northwest.

My Actual Schedule. Note the cities are colored by their country’s flag :D

# of Countries : 8
#of Cities : 15
So aside from Ireland being Ireland, the English really fucked it up when they did the translation for Italian city names. I actually quite like the Italian versions. Actually, hearing Italians speak Italian is just great. Also, apologies to my Irish readers, but I finally understood the distinction between Ireland and Northern Ireland.

In the previous post (pre-trip), I put up a photo of all the things I packed…then I ended up taking out a few other things. Nothing major, just the second pair of pants, as well as the clothes that I wore on the day of flying out. The altered content is shown here (left), as well as my backpacks (right). Oh you must be wondering why all my shit are in ziploc bags. It took me a while to find these vacuum bags in the stores, but they were actually great for organizing everything, and squeezing the air out saved tons of space. 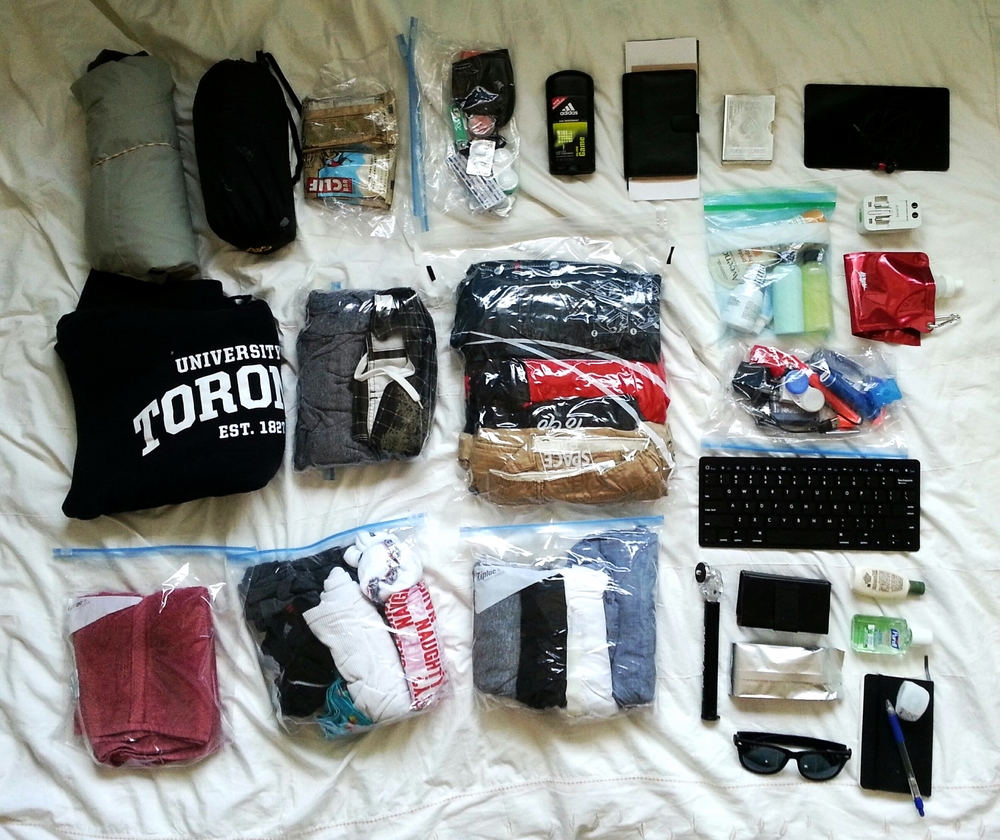 Shit I brought with me. 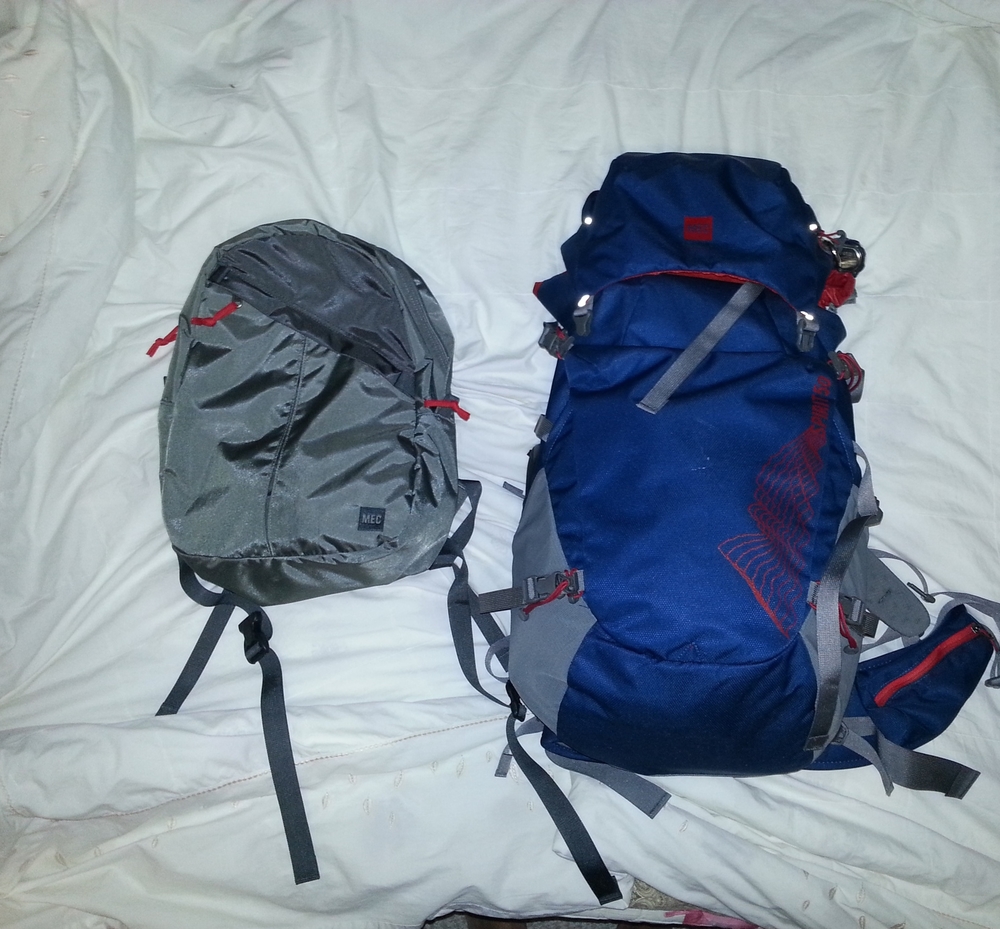 My Trusty Backpacks: Ray the day-pack (gray) and Lou the big pack (blue)

Almost everything I packed were put to good use, luckily. Some of the honorable mentions, aside from the essential clothing and equipment: Clif bars, bike light, selfie-stick, and earplugs. But, of course, some of the things never even breathed European air, which brings me to my:

“Why-did-I-think-I-would-need-this” List
1) Bluetooth keyboard: alright, I’m just going to put it out there that unless you’re a professional writer, any hopes of writing on the road is a pipe dream. I don’t mean that somehow writers can handle their craft better, but to put it simply, when you’re on the road, if you don’t have to do it, you won’t. I ended up lugging around this thing and used it once, during my boat ride from Barcelona to Rome, and that was during the last two hours of the 20-hour journey simply because I couldn’t sleep anymore.

2) Sleep-mask: I put them on, then I had an irrational fear of being raped, robbed, and/or having dicks drawn on my face. Bottom of the bag you go. People are very considerate to not turn the lights on at night.

3) Tide-To-Go: just don’t. Don’t even use this at home. I don’t know what I was thinking, I must have forgotten that Tide-To-Go would really only be useful on white shirts, and that I only brought one white shirt, AND that Tide-To-Go actually makes white shirts yellow. Dropped some pizza on myself one day, I thought, “perfect, I’ll use my Tide-To-Go.” That slice of pizza is now forever commemorated by a bright yellow spot on my white shirt.

Other things I never used : swimming trunks (forgot to bring to the beach the one time I went), diarrhea meds (yay), Tylenol (yay again). In general, my advice for packing for a trip in Europe is this: they have everything that we have over here.

Life-changing experiences don’t come cheap, the total trip came to be a hair under $5000 (literally, a hair):

When I first started planning the whole thing, I had budgeted for $4000. But soon after I purchased my plane tickets and the miscellaneous items, I’d realized that it would be closer to 5k. Daily spending was about $100 per day, which included food, lodging, tickets to get in museums, souvenirs, etc. Factoring in some odd train tickets and whatnot, things got rounded up nicely to a total of $5000.

I meant to write about this before I left. The following is the research I did before I left, which after seeing my transactions, I’m not sure is completely accurate. But basically there are 3 common ways of spending your money in Europe, which are:

1. Buying euros at home and taking the cash to Europe
- Bank uses its own exchange rate

2. Withdrawing euros from European ATM
- Uses foreign bank rate (whose ATM you’re using)
- Your home bank charges you a flat fee for every international withdraw, which was $5 for TD. I believe some banks don’t have this charge, like Chase.

3. Credit card
- Visa charges something like 2.5% for every transaction, and uses its own rate. Just an interesting side note, it took me 2 phone calls, a visit to TD, and going on Visa’s website several times to find out this little fact, apparently nobody knows what the commission is.
UPDATE : apparently this is wrong. Turns out, TD (or your bank) tacks an additional rate onto Visa’s own, as specified in your credit card user agreement, but the conversion rate is the one cited by Visa.

Just to clarify a point in case anyone is unfamiliar, banks use different rates for buying and selling. For example, if the actual CAD to Euro exchange rate is 1.5CAD for 1Euro, a Canadian bank might sell you euros at 1.55CAD for 1Euro, and buy your euro at 1Euro for 1.45CAD. For comparison, here is a sampling of the rates I got through the different methods, compared to the actual. Of course, these rates fluctuate everyday, but usually not by a huge amount.

Looking at this, it seems foreign ATM is the way to go. But in the end, it becomes quite inconsequential if you consider that the difference of 2% is about $10 for every $500 you spend. For some reason though, I got screwed by TD/Visa on the Pound, I don’t know why that is, maybe TD’s got a surplus of it back in Canada. Either way, I don’t know why I spent so long detailing this. I’d recommend just doing what I did, withdraw some cash and use your credit card as much as possible. Finding the balance between having enough cash to be flexible, but not enough to break your bank if it gets stolen, is the key.

While I’m on the subject of money, I’ll just talk a bit about the Eurail train pass. The pass I got was 5-days, 4 countries, meaning on 5 non- consecutive days, I can take as many trains as I want on those days, in the 4 chosen countries (I had Italy, Switzerland, France, Belgium-Netherlands- Luxembourg). I’m not sure why those last 3 count as one country, maybe it’s under the same train operator. All that was for $440, or around 250 euros, which means for the thing to be worthwhile, I should take more than 50 euros worth of train on each of the 5 days.
So was it worth it? Well, firstly, train tickets are extremely cheap in Italy, and very rarely will you find a single second-class ticket for more than 60 euros, unless you’re going across the country on one ride. I used a day for going from Naples to Pisa then to Florence, which was about 60 euros altogether. So if you’re traveling in Italy, it’ll definitely take some work to make it worth it, especially if you plan to stay in a city for a while. Trains in Switzerland and France are a lot more expensive, but here’s the kick in the balls: almost all high-speed trains, i.e. direct, require reservation and a reservation fee, which the pass does not cover. This was the case in Italy too, going for about 10 euros. But in France and the Northern countries, they can go up to 40-50 euros, for just reservation. ALSO , France has limited number of seats available for reservation using the pass, so while a train might be empty, the passholder section might be fully booked out. For example, I took a Basel to Paris train, which consisted of a regional segment and a highspeed segment. The full price is 110 euros, but reservation was 40 euros alone. I was too cheap, so I opted to reserve a seat on the highspeed train to the stop before Paris and take the regional to Paris (which takes an hour longer), which only costed 10 euros, but they ended up letting me stay on all the way anyway, so that was nice.

All in all, the rule of thumb is that if you’ll be taking a lot of regional (slower) trains, then the pass is great since you don’t need to reserve and you can just hop on the train, see the city, and go somewhere else. But if you’re traveling in the Northern countries and taking direct trains, it might just be better to buy them as you go. In the end, I think I still saved some money, but I was committed to using the pass only when the ticket was going to be over 50 euros, which took some effort. I do, however, highly recommend the free Eurail/InterRail Rail Planner app. It’s not 100% up to date and doesn’t have all the regional trains, but the biggest advantage of it is that it can be used offline, so you can plan your trip on the fly even if you’re not currently situated in a hostel.

Most unexpected thing I had to buy: superglue

# of Madonna e Bambino (Virgin and the Child) paintings I saw: too many.

That’s all for now folks, I will probably be moving onto the actual content of the trip in the next post. Until then!