Can we ever accomplish non-consensual brain-reading? [Part 2] (3/52)

All this is to say, there is some non-zero correlation between the brain activity of two different people describing similar things, but it is definitely not quite to the level of thought-reading across different people.

Two days after I wrote last week’s blog piece, someone mentions in class that somebody had just done a study where they found common representation of memory across different people’s brains. I thought to myself, “well that is just absurd.” But that someone happened to be Terry Sejnowski, so I thought he probably knows what he’s talking about. So I dug up the study, which, as it turns out, was only published about a month ago. Well, after having read through it, I wouldn’t quite say there was common representation of thought between people, but it was interesting enough that I thought it warranted an unexpected Part 2 to last week’s post.

The paper in question is “Shared memories reveal shared structure in neural activity across individuals”, from (mainly) Uri Hasson’s group in Princeton. Before I get into it, I want to review why I thought inter-subject decoding is an impossibility (for a detailed exposition, go to previous post). There are 3 main reasons: first, brains between different individuals are not the same anatomically; second, you need to build a different brain-to-thought dictionary for each person; and three, each person’s thoughts are contextualized by their own lives, e.g., “apple” does not mean the same to me as it is to you if I’ve only ever eaten green apples and you, red. The third reason is more or less the motivation for the second, but solving either of them will bypass the decoding problem, hence I included them as distinct.

Overcoming the the challenges of inter-subject decoding
Well, I still maintain that we cannot achieve non-consensual thought-reading, but this study WAS able to find shared structure in neural activity across different individuals. How? Their experimental design directly overcame two of the three issues I raised above. The setup was as follows: each participant comes in to the lab and lies in an MRI scanner for an hour while watching a movie (BBC’s Sherlock woohoo!) and getting their brain scanned. Afterwards, they were told to recount the story from the movie while also getting their brain scanned. Finally, the brain data is organized by scene, where brain activity from the same scene is averaged across time. This is done for all 17 subjects, and there are two main comparisons of interest here: similarity of brain activity of the same person between watching and recounting the same scene, and similarity of brain activity of two different people recounting the same scene.

So how did they overcome two of the issues I mentioned? First, the experimenters transformed all the brain data to a common space, an “average brain” of some sort. There are several of these average templates in the fMRI world, they basically need to pick one, and warp and stretch every individual’s brain such that it matches this anatomical average. This gets past the “different brains” problem. Second - and this is subtle but very important - the participants all watched the same movie! By doing so, all the memories or “thoughts” about events in the movie are more or less contextualized by the same things, i.e., scenes before and after. Of course, they can never be exactly the same. For example, someone who is a self- proclaimed Cumberbitch (me) will probably react very differently (emotionally) to scenes which he is in, compared to someone who hates his acting and British accent. In addition, objects in the scene may trigger spontaneous thoughts from a participant’s own life, like seeing a horse and remembering their own horse-riding experience, which cannot happen for someone that’s never ridden one. But by and large, the same sensory cues are used by everyone to stitch the story together into a coherent movie. And in this way, they have manufactured “shared memories”.

So, were they successful in finding shared structure between people who shared a similar experience? Well, successful enough to get published. Again, there are a few possible comparisons they look at here, but I will just focus on the one: similarity of brain activity of two different people recounting the same scene. The brain data for each person is basically two 2-dimensional matrices, scene-by-brain region (voxel), since they collapsed all the measurements during a scene into a single average. One of the matrices is made from the watching data, which we don’t care about, and one from the recounting data.

Recounting for different people
This is our main question: when two people talk (and think) about the same experience, do they evoke similar patterns of brain activity? In this study, they didn’t quite look at the one-to-one comparison. Instead, they compared an individual’s brain activity to the average of everyone else’s. The math is super simple: for a single brain area (voxel), correlate the scene values of a single person with that of the average of the rest, and do this for all the voxels in the brain. To test for significance, they compared to a null distribution built from the correlation between different scenes (which should be around zero). Figure 3 from the paper illustrates this result (below). Sub- panel b shows the areas of the brain for which there was significant correlation, mostly covering the higher visual areas, temporal regions, and posterior medial cortex (PMC, circled). They further show that at the PMC voxels, most people’s correlation ranged between 0.1 to 0.3, which is presumably the best region they could find. These seem like small numbers, and they are, but compared to pure chance, they’re still pretty good considering all the noise and extraneous influences onto every person’s brain while recounting the movie, and that’s not considering how their memories all differ in a different way from the original movie itself. All this is to say, there is some non-zero correlation between the brain activity of two different people describing similar things, but it is definitely not quite to the level of thought-reading across different people. 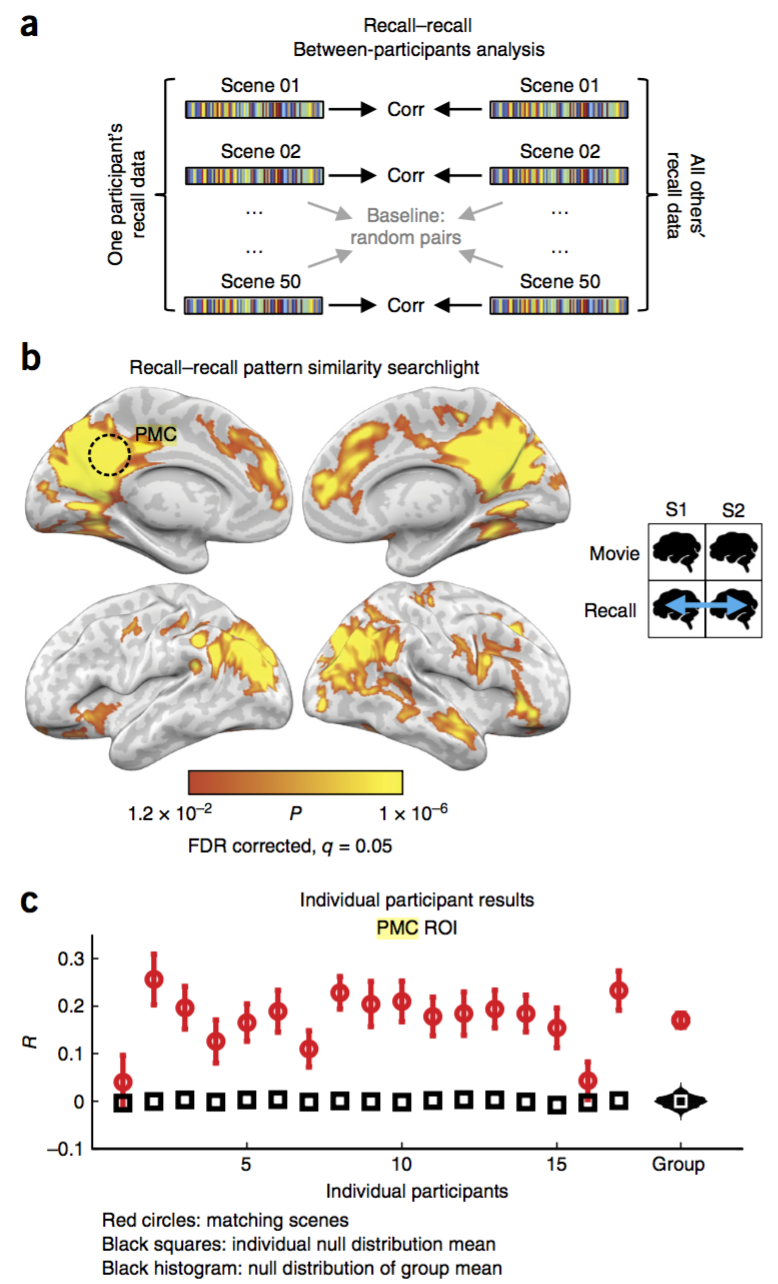 In conclusion
So in conclusion, while this is not at all the same as reading one person’s thoughts from their brain activity based on another person’s thought-to-brain dictionary, it’s still an advance in the general direction, though I’m not sure we’ll ever get there asymptotically, especially when we’re talking about non-consensually. There are some implications, however. For one, we’ve known for a while that sensory representation share some structure across different people, like how everyone’s visual cortex is in the back of their head, but “memory” representation seems to also share some spatial structure. Now, we can talk about what “memory” really is, is it even a separate thing from replaying of sensory experiences, but that’s for another time. The paper also describes several other findings that are interesting, such as the similarity of brain activity, within the same person, between watching and describing the movie. Intuitively, we’d expect that memories should be pretty similar, but not exactly the same, as the sensory experience itself, though there’s no reason why they should share any similarity in the spatial structure of their representation. But that is what the study has found (also with correlation between 0.1 to 0.3). One caveat here is that finding correlation between brain activity is not the same as actual decoding, i.e. interpreting the memory itself based on the brain activity. When the space of possible memories is limited to a pool of 50 movie scenes, it becomes a relatively straightforward classification task (which they perform, as another experiment), which means you can have zero knowledge about the visual & audio features and still be able to guess the scene. But in general, brain-reading that might be used in any meaningful way will have to be able to decode the visual/audio/affective features AS images/sounds/emotions, not just a categorical scene label.