“Scientists discover how to upload knowledge to your brain.” (10/52)

For all I know, somebody could’ve read this and thought we can plug into the Matrix now, and that’s where I swoop in and save the day from bad science journalism. Go me!

I was thinking to myself the other day: “hmm, I haven’t come across a really shitty news article about brain science recently, I wonder if science journalists in the neurosciences stepped up their game after feeling the pressure from my intensely popular blog posts about science communication?”

Then, this gem dropped out of the sky into my lap (thanks Kelvin). Give it a read, it’s worth it. 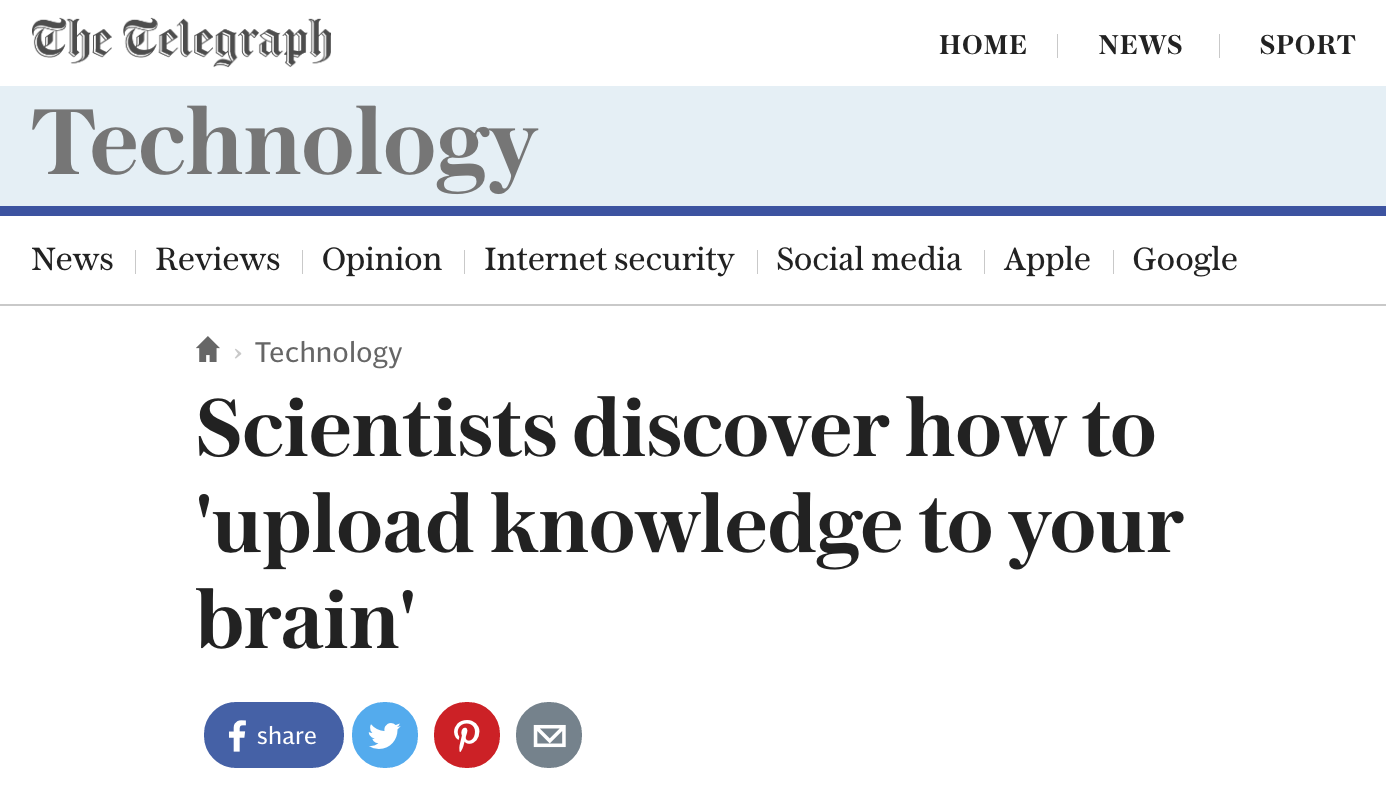 I can’t think of a more click-bait name than this, honestly. Whatever they’re paying these people, it’s not enough.

Are you not entertained?

Apparently, since I last popped my head up from working on some trivial problems in neuroscience, somebody had gone and figured out how to directly upload knowledge to our brains! (I had to look thrice to make sure that this wasn’t the fucking Onion.)

What journalists think scientists did:
So, what happened here? Well, first, according to this news article, “scientists” believe that we could soon feed knowledge directly into the brain Matrix-style, and researchers “claim” to have already developed a stimulator that can do so. Uh…so which is it? Can we already do it or will we be able to do it soon? And who the hell are these scientists and researchers claiming that?

Okay, nevermind that. On the next line, we learn that apparently it only “amplifies” learning, and on a much smaller scale than seen in Matrix. This is Good Journalism 101: if your readers are not disappointed by the third paragraph, you’re not doing it right.

But wait! On the very NEXT line, it says that scientists “studied electric signals in the brain of a trained pilot and fed the data into novice subjects…and improved their piloting abilities and learned the task 33% better.” The article goes on to conclude with some words like “neuro- plasticity” and “synergy of cognitive and motor performance”, and reminds us that Egyptians used electric fish to stimulate the brain some 4000 years ago.

What I think the scientists did after reading this article:
So the article itself sends some confusing messages. In the best possible interpretation (or is it the worst?), these scientists were able to directly upload the skills of flying a flight simulator into some novice brains. This is fucking groundbreaking! Why? This implies that we’ve broken the code with which the brain encodes information, such as concepts of altitude and speed, as well as motor commands. Not only that, we can now upload that information directly and through digital means in a completely nonchalant way to random volunteers! Why the hell do we still have training programs?!? This is literally Captain America: the Winter Soldier!

Okay, maybe this optimal reading is a bit too literal (I mean literal as in I’m literally reading the words that are showing up on my screen.) Afterall, had that been true, this paper probably would’ve been in Nature AND Science in the same week, not Frontiers in Human Neuroscience. Nothing wrong with Frontiers, I just don’t typically see papers casually break the neural code there, that’s all.

So then, to be fair, this news article pares back and seems to inject a hint of actual scientific rigor. In this interpretation, scientists recorded brain signals from trained pilots and played them back into the novices’ brains through an electrical stimulator. Having adjusted my expectations appropriately as such, I was actually pretty excited about this result. The method itself is plausible enough: record voltage fluctuations on the scalp (EEG) of the professional, and play it back on the scalp of the novice, and apparently it facilitates learning! This would also be pretty groundbreaking (less sarcastically so) and it would ask many more questions than it would answer, such as: “why the hell should that work at all?” Everyone’s EEG is pretty unique, and if playing that back onto someone else’s brain helps them learn, it would mean that there are some invariant brain signatures that represent certain skills or information in general. I can hardly contain my excitement at this point. So I dig up the paper, and what did these folks do?

What the scientists actually did:

Fuck you, the Telegraph.

Addendum: I would’ve ended this rant right there, but I think my non- neuroscience friends wouldn’t get the joke. Basically, tDCS is a method of brain stimulation, a very unsophisticated one at that. tDCS stands for transcranial Direct Current Stimulation. Transcranial as in through the head, and Direct Current as in…that’s right, direct current. Essentially, tDCS is connecting a (or many) 9 Volt battery to your head such that a steady flow of electrons comes out of the battery and through your head. It is as unexciting as you could possibly make brain stimulation to be (though it is literally shocking), and it certainly does not track the “recorded brain signal of the professional pilot”. I don’t even know where this journalist person got that idea from. I re-read the Methods section like 4 times just to make sure I didn’t miss something that was super important, but nowhere in there (nor in the abstract & introduction) does it mention variable brain stimulation. As far as I can tell, the innovation in this study is the concurrent recording of brain signals with brain stimulation, and a more focal/ spatially precise way of stimulating the brain, which is achieved through a new fancy system. Other than that, the experiment is literally to compare the performance of those that were hooked up to a battery during training versus those that weren’t.

Addendum to the addendum: I honestly can’t imagine how this news article could have come out so wrong. It seems like the main authors of the scientific paper are not at an academic institution, so perhaps their PR team wasn’t equipped with dealing with “science journalism”. I cannot imagine what the authors must be thinking right now, though I suppose there is no bad publicity, especially if people won’t even realize this is bad publicity. For all I know, somebody could’ve read this and thought we can plug into the Matrix now, and that’s where I swoop in and save the day from bad science journalism. Go me! Also, I realized I did not make a comment on the actual scientific finding, which is that, as unsophisticated as zapping your brain with a (DC) battery is, it led to actual performance gains overall, as measured by some flight-landing metrics. I honestly don’t know too much here, but I will say that this finding falls squarely within a larger context of the contentious debate about whether tDCS actually does something to your brain, as summarized very nicely here.

So the take-home message? Please, for the love of god, don’t get your science from the Telegraph.